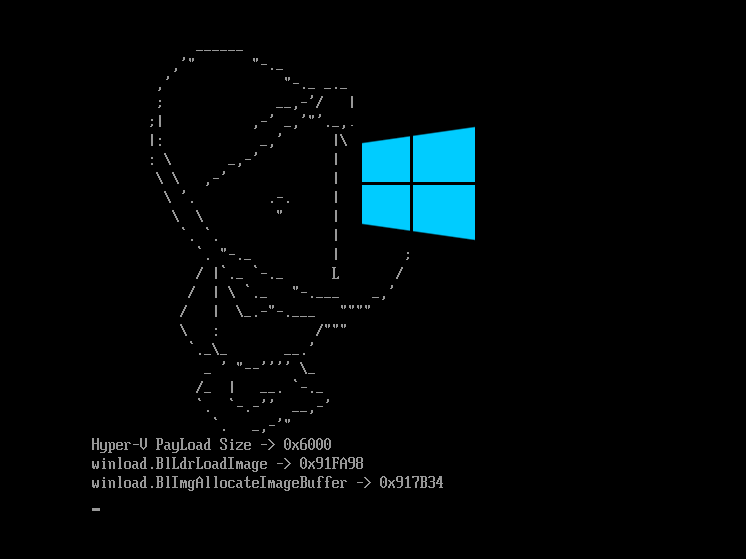 Voyager is a project designed to offer module injection and vmexit hooking for both AMD & Intel versions of Hyper-V. This project works on all versions of Windows 10-x64 (2004-1507).

Please follow the instructions on this page https://github.com/ionescu007/VisualUefi. After you have compiled the EDK2 libraries, copy the ones used by Voyager into the edk2 folder inside of the Voyager folder. You should then be able to compile Voyager.

Note you will need to install nasm and add it to your PATH system variable. This is detailed on VisualUefi repo.

At first install NASM (https://www.nasm.us/) and check, that environment variable NASM_PREFIX is correctly set to NASM installation path. No other 3rd party tools are needed. Than you should be able to open the EDK-II.SLN file and build without any issues in either Visual Studio 2015 or 2017. WDK is not needed. Once the EDK-II libraries are built, you should be able to open the SAMPLES.SLN file and build the samples, which will create UefiApplication.efi, UefiDriver.efi, Cryptest.efi, and FtdiUsbSerialDxe.efi

HookChain - information and order of hooks...

If you look at the project you will see hvloader.c/hvloader.h, these contain the hooks that are placed inside of hvloader and are installed from a hook inside of winload. 1703-1507 requires an extra set of hooks to get to where Hyper-v is loaded into memory.

Hvloader.efi (found in windows versions 1703-1507) contains alot of the same functions that can be found inside of winload.efi as explained in the section above. In Windows 10-x64 versions spanning 1703-1507, Hyper-v is not loaded from a function found in winload.efi but instead of the same function found inside of hvloader.efi. These functions are hvloader.BlImgLoadPEImageEx and hvloader.BlImgLoadPEImageFromSourceBuffer for 1703 specifically.

hvax64.exe is the AMD version of hyper-v. This module along with hvix64.exe does not have any symbols (no PDB). To find the "vmexit handler" if you want to call it that for AMD hypervisors, I simply signature scanned for 0f 01 d8 (VMRUN). AMD Hypervisors are basiclly a loop, first executing VMLOAD, then VMRUN (which runs the guest until an exit happens), and then VMSAVE instruction is executed, the registers are pushed onto the stack, the exit is handled, then VMLOAD/VMRUN is executed again the cycle continues...

Please enable hyper-v in "turn windows features on or off". Then run launch.bat as admin, this will mount the EFI partition and move some files around then reboot you. Voyager is designed to recover from a crash. The first thing Voyager will do when executed is restore bootmgfw on disk. If any complications occur during boot you can simply reboot. Simply select the windows version you want to compile for and then compile the entire solution... Rename Voyager.efi to bootmgfw.efi, do the same for Payload (xxx).dll, rename it to payload.dll. Put both bootmgfw.efi (Voyager.efi rename), and payload.dll in the same folder as launch.bat.

libvoyager is a tiny lib that allows a programmer to integrate voyager into VDM or other projects that require reading and writing to physical and virtual memory. There is an example in the repo which contains example code for integrating into VDM.

Any project that uses VDM can now use Voyager instead of a vulnerable driver. This includes all PTM projects.

mm.cpp and mm.hpp contain all of the memory managment code. Hyper-v has a self referencing PML4E at index 510. This is the same index for all versions of Hyper-v. This is crucial as without knowing where the PML4 of the current logical processor is located in virtual memory, there is no way to interface with physical memory. Each logical processor running under hyper-v has its own host cr3 value (each core has its own host PML4).

In the Intel and AMD payloads of this project, there is a section for PDPT, PD, and PT. These sections need to be page aligned in order for them to work (they are just putting this here as a warning). Each logical processor has two PTE's, one for source and one for destination. This allows for copying of physical memory between two pages without requiring a buffer.

The demo project contains everything one would need to start coding using libvoyager. The demo uses VDM to get the dirbase of explorer.exe and the hypervisor to read/write to explorer.exe